Greece has the lowest rates of babies born out of wedlock among all of the EU member-states, proving the country still holds traditional values high, according to Eurostat data.

The data showed that the institution of marriage was still a significant component in many countries such as Greece, where 9 out of 10 babies were born from parents already married, with Croatia and Cyprus following closely and making up the most “traditional” countries.

France is at the top with a majority of babies born out of wedlock – 60 percent. On the other end of the scale, Greece has the lowest rate, where nine out of ten children were born to parents that were already married. 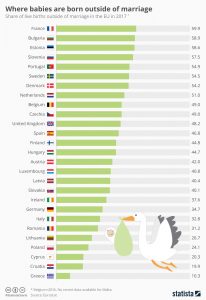