Fatal road crashes in Greece plunged 41 percent between 2010 and 2017 but remained significantly higher than the European Union average, according to figures released by the European Commission.

Although the 2010-2017 decline in fatal incidents was double that seen in the EU, the number of fatalities per million inhabitants stood at 69 in Greece in 2017, compared to 49 for the EU as a whole.

On the other hand, member states with the highest fatality rates were Romania (98) and Bulgaria (96). 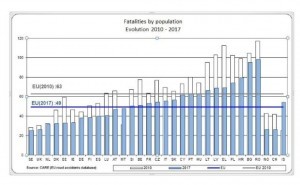 Greece also saw a 10 percent decline in fatal crashes in 2017 compared with the previous year.

In a statement the European Commission said that the reduced trend in fatalities Europe-wide is “encouraging, reaching the EU objective of halving road fatalities between 2010 and 2020 will now be very challenging”.

In addition, it is estimated that another 135,000 people were seriously injured last year, including a large proportion of vulnerable road users such as pedestrians, cyclists and motorcyclists.

“Beside the victims, road fatalities and injuries also affect the society as a whole, with an estimated socio-economic cost of €120 billion [$148 billion] a year,” the statement read.