Cyprus also made it to the final

Greece’s upbeat “Better Love” performed by Katerine Duska advanced to the 2019 Eurovision song contest after the Greek song was voted by the public and jury on Tuesday night’s first semi-finals. Cyprus will also be represented in the Grand Final with Tamta’s “Replay”.

Along with Australia’s breathy act, “Zero Gravity,” by Kate Miller-Heidke, which showcased dancers’ fancy footwork on stilts and also moved into the finals, Greece’s “Better Love” are considered two of the competition’s frontrunners.
Contestants from Australia, Iceland, Greece, Belarus, Serbia, Cyprus, Estonia, Czech Republic, San Marino and Slovenia moved ahead after televotes trickled in, with much suspense, from all 41 countries in the contest. The national votes are split between a professional jury and phone-in viewers.
The show, replete with its characteristic camp, featured a dizzying array of acts, from the grinding metal rock of Iceland’s steampunk band to the catchy pop of the scantily clad Cypriot singer.

Thousands of fans packed the Tel Aviv hall, waving flags and cheering patriotically.
Some 200 million viewers worldwide tuned into the spectacle.
The second semifinal on Thursday also will vault 10 countries to the final round, which will be held Saturday night in Tel Aviv. 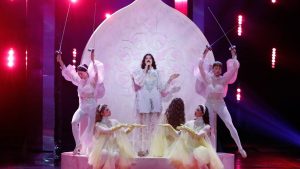 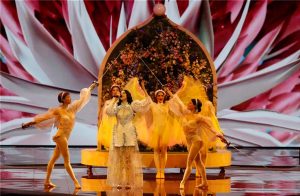 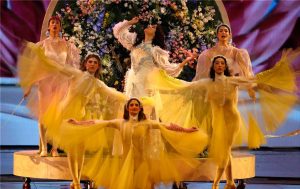 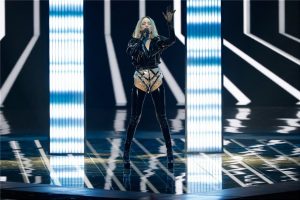