Greece fears Turkey will cause a hot incident

The Hellenic Armed Forces have been put on high alert following Turkey’s decision to send the Research/Survey Vessel Oruc Reis to the sea area east of Crete with the aim of conducting seismic surveys to locate hydrocarbon reserves.

As is evident from the map presented by protothema.gr with the area Turkish authorities have issued a NAVTEX for (in a red box), it covers a region in the Greek Exclusive Economic Zone, which is shown in blue. 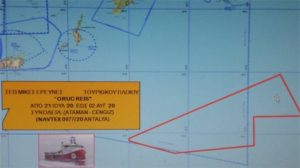 According to Greek Pentagon officials, the Turkish side’s commitment to the region was based on the legally binding agreement signed by Ankara with the Libyan government and submitted to the UN.

This area is located southeast of Kastelorizo in the eastern Mediterranean.

Both the political and military leaderships of the Pentagon are considering a number of scenarios for the reaction of the Greek Armed Forces due to the concern that the Turks may proceed to an immediate escalation of tension, even provoking a hot incident.

Greek PM Kyriakos Mitsotakis upon his return from Brussels received German Foreign Minister Heiko Josef Maas but focused in his statements on the negative developments with Turkey stating at the start of their meeting: “I am very glad to welcome you at the Maximos Palace, at a time when under normal circumstances we would be discussing the great European success, the result of yesterday’s Summit. Unfortunately, the news forces me to start with one remark: Turkey once again adds another link to the offensive against Greece, against Cyprus, and finally against the European Union as a whole.”

Meanwhile, the U.S Department of State called on Turkey to refrain from escalating tensions in the region. “The United States is aware that Turkey has issued a NAVTEX for research in disputed waters in the Eastern Mediterranean. We urge Turkish authorities to halt any plans for operations and to avoid steps that raise tensions in the region”