The Deputy PM G. Dragasakis said that the government is being cornered but will stick to its beliefs

Negotiations with Greece’s international creditors are drawing to a standstill, with the Greek government rushing to give assurances that there is no immediate danger to Greek finances. Nonetheless, Greek Deputy Prime Minister Giannis Dragasakis told private Alpha TV that if a solution isn’t found to Greece’s problems soon then there will be problems to liquidity.

“Since last August we have not received an installment and are paying, both we and the previous government, all our obligations to our partners,” said Dragasakis. “We have an economy that is borrowing money to pay off loans and this is creating asphyxiation. There is a problem of liquidity, as we have obligations that need good cooperation with partners in order to be covered. There will be problems if it is not ensured that all institutions don’t play their role.”

On Thursday’s meeting of Prime Minister Alexis Tsipras with his EU partners, Dragasakis expressed the hope that a positive outcome could be reached. He also asked why Brussels’ technocrats are better at solving Greece’s financial situation than economists of the level of Finance Minister Yanis Varoufakis and Greek chief economic spokesman Euclid Tsakalotos.

He said that there is currently a dilemma between “old and new”. Regarding the agreement made at Eurogroup on February 20, he said that Greece had managed to get a reduction to the primary surplus. He pointed out that there are many who are wrontly interpreting the agreement and have started a communication battle. He said that a strategy of credit asphyxiation has begun in the hope that Greece would back down as had been done by previous governments.

Dragasakis also refered to the letter by EU representative Declan Costello, Directorate General for Economic and Financial Affairs of the European Commission. “A technical official wanted to become the prime minister of Greece. I’m glad that the Commission didn’t cover for him. There are two levels of understanding. The political and the level where technical groups discuss things. They will come to examine data, not for political negotiations,” said Dragasakis. “I respect the technocrats of Brussels but I don’t agree that they are better than Varoufakis and Tsakalotos.” 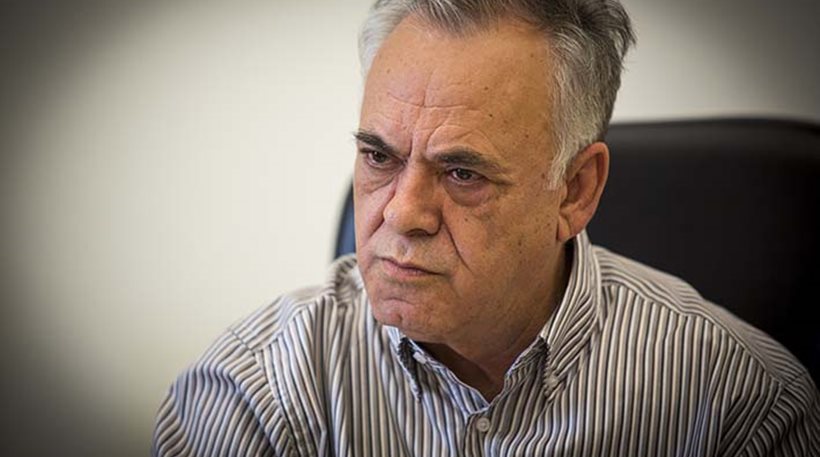 He said that discussions are underway with the Euroworking Group for the legislation of the debt settlement in 100 instalments and said that on the one hand, Greece is not being given money, but on the other hand it is not being given the freedom to legislate in order to gather money. Nonetheless, a Grexit is not the government’s choice or his own personal choice. “We are ready, based on the agreement, to discuss specific costed reforms,” he said. “We can become more specific regarding which changes and policies can be implemented over the coming period.”

He said that the Greek-German conflict is one of ideas. “We have forces that insist on the application of austerity in many countries. What makes things difficult is that they understand that a positive development in Greece would give other nations courage,” he said.

Asked to comment about Varoufakis, Dragasakis said that everybody has their own style and expression. “For Yanis, the move from an academic craeer to politics has some difficulties. There are positives and negatives concerning this. He has a very difficult role and has helped Greece a lot, a country cornered. They are striking against him to disorientate the government. They would act the same way even if he wore a bow,” says Dragasakis.