A Facebook post by Alternate Minister of Administrative Reform, Christophoros Vernardakis on his personal page that the leftist SYRIZA-led Greek government was effectively segregating Greek citizens on social media according to their political beliefs, has raised serious questions about the freedom to adopt and express one’s political ideology. 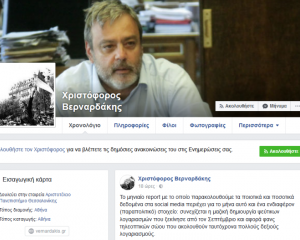 Making reference to a “monthly report” the government was using to monitor citizens in his post, the Minister wrote: “The monthly report that monitors the qualitative and quantitative data in social media also contains an interesting (para-political) element for this month: the massive creation of fake accounts, which began in September and is continuing, and concerns fans of TV shows that simultaneously follow right [political] accounts”. 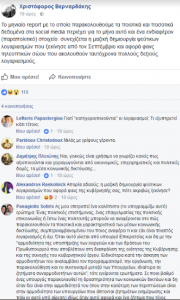 The government has lately introduced the “fake news” narrative in its political discourse in an effort to pre-emptively discredit any criticism or negative comments against it on social media. Aimed at managing and controlling any unfavourable views while concurrently promoting a positive image of its policies, the government has adopted a social media campaign based on quantitative and qualitative measurements.
It was revealed that apart from the data gathered by the PM’s office in a monthly report, which included the “likes”, “followers”, “age groups”, “visits per day”, “peak hours” etc, the PM’s social media team also separated the monitored accounts based on their political affinities (right or left). In a response below the Minister’s post, some commenters drew attention to the impropriety of such an activity “To what extent does a minister monitor the activity of social networks, especially when it is not in his purview?”, he wrote