1,000 choir members from all over Greece meet to celebrate the great composer

The Panathenaic Stadium saw a huge crowd on a warm Athens Monday night honouring one of Greece’s greatest composers, Mikis Theodorakis in a historic concert celebrating the famous 91-year old musician. The audience, both young and old, experienced some of Theodoraki’s musical masterpieces over his along-spanning career, including “Vrechei sti Ftochogitoneia” and “Sto Perigialli to Kryfo”. Mikis, who is known throughout the world for his award winning Zorba, arrived in his wheelchair at the concert called “All of Greece for Mikis – 1,000 voices” and watched the show put on by 1,000 choir members for the first time. Mikis, who twice raised from his wheelchair to wave at the crowd, sat next to the President of the Hellenic Republic Prokopis Pavlopoulos and the President of the Greek Parliament Nikos Voutsis. The concert was organised under the auspices of the Presidency. 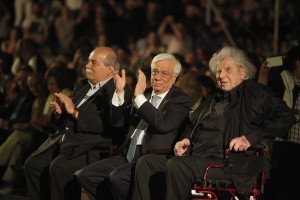