Greek police have arrested three members of an Arab-speaking armed gang that is terrorising tourists and locals at the Strefi Hill in Athens. The men were detained by police officers on Sunday at Kannigos Square in downtown Athens after they had robbed and sexually harassed two female university students at Strefi Hill.

Police located the three men, who are of Algerian origin, based on sketches from descriptions provided to them by the assaulted university students. Following their attack on the two young ladies who the held at gunpoint and robbed, the Algerians moved to the centre of Athens and attempted to rob an elderly man in Kannigos Square. But they were confronted by police who finally subdued and arrested them, following a struggle, as they attacked the police in their efforts to flee. The culprits were taken before the Athens Prosecutor. 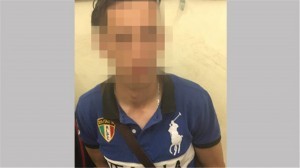 Police are continuing their investigations as they estimate the men were members of a larger, vicious gang with many members operating in the area of downtown Athens. The gang members appear to have become much more aggressive and as they are also sexually assaulting women part from robbing their victims.