The couple sold drugs in Mykonos

Two drug traffickers were arrested after Greek law enforcement officers uncovered an elaborate plan they had set up to procure cocaine from Athens to Mykonos.

An Albanian suspect named Adrian, 45, known as “Aris” and a female accomplice named Nella was taken into custody after it was revealed they were hiding the drugs in stuffed toys and selling them to clientele on the island of Mykonos.

In a coordinated operation by utilising intelligence they had gathered, officers of the Narcotics Unit of the Mykonos Coast Guard in collaboration with the General Affairs of the Drug Prosecution Sub-Directorate of Thessaloniki managed to detect the illegal substances in the toys and arrest the suspects. 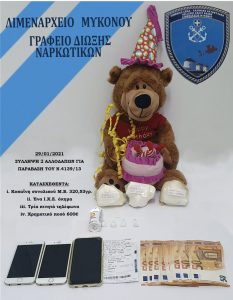 The leader of the circuit, a 45-year-old Albanian, Adrian, known in the squares of Athens and Mykonos by the code name “Aris” and in his side-kick, a charming blonde woman, Nela, who would transport the cocaine in the teddy bears were caught on the afternoon of January 29. The law enforcement agents of the Mykonos Port Authority in collaboration with the General Affairs Department of the Drug Prosecution Sub-Directorate of Thessaloniki blocked the couple as soon as they disembarked from the ship and handcuffed them.