Four scenarios in a conflict between Greece and Turkey

Two days before the crucial local elections in Turkey, the pro-government newspaper Yeni Safak published 4 war scenarios included in a book in the Aegean and the Eastern Mediterranean which involved Greece, Turkey, and the US.

According to the newspaper, the book points out in its preface that what is described in it are hypothetical scenarios and reflect the personal view of the writers.

However, as Safak claims the contributors of the book, as well as the head of the US Navy Institute, are all former Americans military officials, a fact that according to the Turkish newspaper could be interpreted as a possible US stance in a real conflict between Greece and Turkey.

The report in Yeni Safak, titled “The 6th Fleet Will Attack to Turkey,” analyses the possible scenario of a US military intervention in the region by making specific reference to the book of US Navy Captain John Richardson entitled “Fleet Tactics and Naval Operations”.

The subject of the book is the analysis of various war scenarios in the eastern Mediterranean, including the Aegean, and uses maps to illustrate the war operations between the US and Turkey.

In one of the chapters of the book, “War in the Aegean”, it is stated that “Turkey has had a formidable enemy for a long time”. Tensions between Greece and Turkey have reached a point of no return and the United States, supporting Greece, strikes Turkey with the 6th fleet.

In the first scenario-map, Greece installs tactical ballistic missiles on the Republic of Cyprus. In order to prevent this move, Turkey warns Athens in a strong manner, but Greece sends ships to Cyprus which are sunk by the Turkish navy. 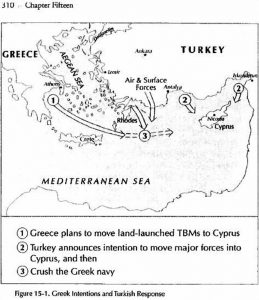 In the second scenario-map, Turkish commandos commence amphibious operations to take over the Greek islands of Limnos, Lesvos, Chios, Samos, and Kos. 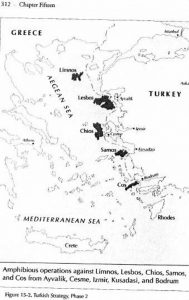 In the third scenario-map, American aircraft carrier “USS Harry S. Truman” and other US ships in the south of Cyprus in the eastern Mediterranean confront Turkish ships. 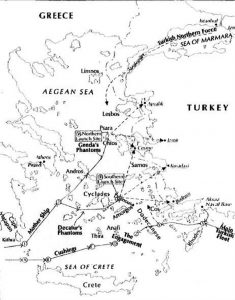 In the fourth scenario-map, US military forces appear to be amassing north of Chios and south of Amorgos and targeting Ayvali, Smyrna, Cesme, Kusadasi, and Halicarnassus. The 6th fleet is deployed in the Cretan archipelago to the north of the island. 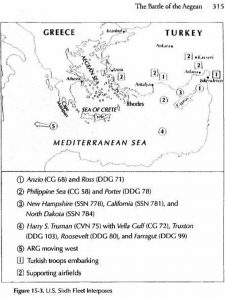