Also, the study shows that Europeans credit EU with promoting peace & prosperity, but say Brussels is out of touch with its citizens

In the decades following the devastation and suffering of World War II, the founders of what would become the European Union sought to build a new Europe, “an ever closer union” tied together through economic and political integration, as well as a shared set of values. Despite the turmoil associated with events such as the European debt crisis, a massive influx of refugees, and Brexit, Europeans continue to believe the EU stands for noble goals.

Across 10 European nations recently surveyed by Pew Research Center, a median of 74% say the EU promotes peace, and most also think it promotes democratic values and prosperity. However, Europeans also tend to describe Brussels as inefficient and intrusive, and in particular they believe the EU is out of touch – a median of 62% say it does not understand the needs of its citizens. 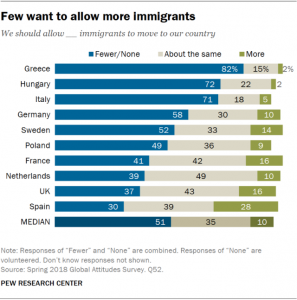 Many are also worried about the economic future. Across these 10 nations, a median of 58% believe that when children in their country grow up, they will be worse off financially than their parents; only 30% think they will be better off.

There are also strong concerns about immigration in some countries. Majorities or pluralities in most nations want fewer immigrants allowed into their country. Many believe that immigrants tend to remain distinct from the broader culture and that immigration increases the risk of terrorism.