Rescue operations were hampered by the ash and the air, which was difficult to breathe

The death toll from Guatemala’s volcanic eruption is expected to reach the hundreds as rescue workers struggle to reach charred human remains buried under ash.

Layers of ash were knee-deep in places, and underneath were the remains of those who could not escape the burning rock and ash spewing from Volcan de Fuego. The name means “Volcano of Fire” in Spanish.

Otto Mazariegos, president of the Association of Municipal and Departmental Firefighters, said that bodies had been buried on inaccessible sites on the volcano’s south side, which overlooks the city of Antigua.

“We saw bodies totally, totally buried, like you saw in Pompeii,” he said, according to The New York Times. 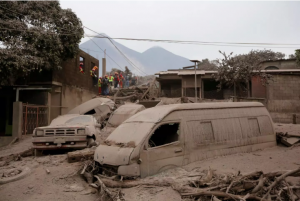 Survivors described the distressing scenes they saw upon returning to the village of San Miguel Los Lotes on Monday.

“My mother is buried there. What can I do to cry? My heart is hard, all our family is here, buried,” Ines Lopez told local newspaper Prensa Libre.

The country’s natural disaster commission, CONRED, said that 3,100 people had to be evacuated and more than 1.7 million people were affected.

Another resident, Consuelo Hernandez, said, “Not everyone escaped. I think they were buried. We saw the lava was pouring through the cornfields, and we ran toward a hill” in a video released by CONRED.

Only 10 people were pulled out of the ash on Monday, and rescue operations were suspended for fear of further eruptions.

However, there has been criticism of the speed of the response by emergency services. 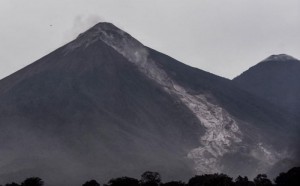 Rafael Letran, a resident of El Rodeo, a town that was also buried, said, “CONRED never told us to leave. When the lava was already here, they passed by in their pickup trucks yelling at us to leave, but the cars did not stop to pick up the people.”

Rescue operations were hampered by the ash and the air, which was difficult to breathe.

“It’s very unstable ground to walk on. The moment you step in, you have to have your mask and whole equipment not to put yourself at risk,” volunteer firefighter Ixmucane Monsanto said, according to CNN.

Fuego is one of Latin America’s most active volcanoes. This is Guatemala’s deadliest volcanic event since 1902, when the Santa Maria volcano killed thousands of people.

CONRED is coordinating its response with charity groups like World Vision. Luis Corzo, humanitarian and emergencies director of World Vision, said: “Dozens of people have been hurt with severe burns, and it is likely the loss of crops and cattle will be on a large scale as vast areas have been affected.

“Clouds of ash and fumes have covered hundreds of miles, disrupting crops, small and large agricultural units, as well as tourist activities,” he added.

La Aurora International Airport, in the capital Guatemala City, around 27 miles away, was shut due to the black smoke and ash in the sky.