They are paying for work that will restore a crumbling cliff, known as the Tarpeian Rock

Gucci is one of the most famous fashion brands in the world. The Italian company has announced that they are funding a restoration project in the heart of Rome. They are paying for work that will restore a crumbling cliff, known as the Tarpeian Rock, which was once a place of execution in ancient Rome.

The Tarpeian Rock is situated in the most historic part of Rome. It is located near the Forum and not far from the Colosseum. The rock is on the southern side of the Capitoline Hill, one of the famous Seven Hills of Rome. Until the first century AD, those who committed capital crimes were thrown from the rock. According to the Daily Telegraph ‘even by the bloody standards of the ancient Romans, it was a particularly grisly way to die. 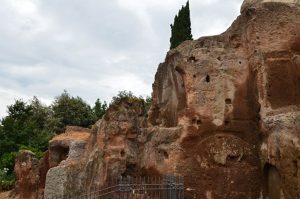 Those who were thrown from the rock on the cliff were typically found guilty of treason or perjury. Many well-known Roman traitors were hurled to their deaths from the height. Slaves who had stolen from, or disobeyed their masters were also thrown from the eminence. Victims hurled from the cliff would fall 75 feet (25 meters) and if the fall did not kill them outright, they were simply left there to die. Their bodies would be left there as a warning to others, especially to the Roman political elite who would regularly gather on the Capitoline Hill not far from the Tarpeian Rock.