Afrin operation by Turkey was not a response to any threat but a product of Erdogan’s ambition to extend Turkey’s borders, which he feels were unfairly drawn by Lausanne Treaty

Over the last four years, I helped lead the global response to the rise of the Islamic State (ISIS)—an effort that succeeded in destroying an ISIS “caliphate” in the heart of the Middle East that had served as a magnet for foreign jihadists and a base for launching terrorist attacks around the world. Working as a special envoy for U.S. Presidents Barack Obama and Donald Trump, I helped establish a coalition that was the largest of its kind in history: 75 countries and four international organizations, their cooperation built on a foundation of U.S. leadership and consistency across U.S. administrations. Indeed, the strategy to destroy the ISIS caliphate was developed under Obama and then carried forward, with minor modifications, under Trump; throughout, it focused on enabling local fighters to reclaim their cities from ISIS and then establish the conditions for displaced people to return. 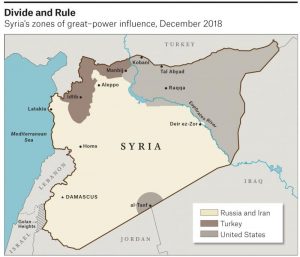 From the outset, the strategy also presumed that the United States would remain active in the region for a period after the caliphate’s destruction, including on the ground in northeastern Syria, where today approximately 2,000 U.S. Special Forces hold together a coalition of 60,000 Syrian fighters known as the Syrian Democratic Forces, or SDF. But in late December 2018, Trump upended this strategy. Following a phone call with his Turkish counterpart, Recep Tayyip Erdogan, Trump gave a surprise order to withdraw all U.S. troops from Syria, apparently without considering the consequences. Trump has since modified that order—his plan, as of the writing of this essay, is for approximately 200 U.S. troops to stay in northeastern Syria and for another 200 to remain at al-Tanf, an isolated base in the country’s southeast. (The administration also hopes, likely in vain, that other members of the coalition will replace the withdrawn U.S. forces with forces of their own.) But if anything, this new plan is even riskier: it tasks a small cohort of troops with the same mission as the current U.S. deployment in northeastern Syria, which is ten times as large.