According to FBI stats

According to statistics released by the FBI, hate crime has increased in the U.S. for the third year running. Last year, the number of incidents increased 17 percent compared to 2016. The total number of incidents grew from 6,121 in 2016 to 7,175 in 2017 with black and Jewish Americans seriously impacted. In 2017, 59.6 percent of the incidents reported were motivated by bias against race, 20.6 percent were against religion and 15.8 percent were against a person’s sexual orientation.

Approximately 5,000 of the crimes were categorized as being against persons with 3,000 involving property and taking vandalism or burglary into account. The FBI said that some of the increase can be attributed to about 1,000 more police departments choosing to report hate crimes. Despite that, civil rights advocates still claim the numbers are vastly underreported due to many victims refusing to come forward and data only including incidents reported to the FBI. 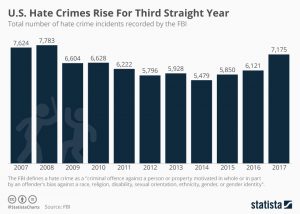