Hate groups are flourishing across the United States, according to a new report from the Southern Poverty Law Center (SPLC). Nationwide, the SPLC identified 917 hate groups last year, an increase on 892 in 2015. The number of anti-Muslim groups in particular has risen steeply, almost tripling from 34 in 2015 to 101 in 2016. 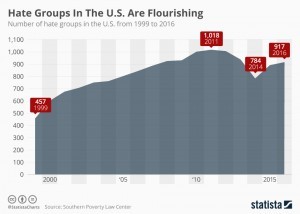