A cemetery at a Christian monastery near the central Israeli town of Beit Shemesh, near Jerusalem, has been vandalized. The monks responsible for its upkeep, who visit the cemetary every few days, found some 30 smashed headstones on Wednesday.

This is the second time that the cemetery of the Beit Jamal Monastery was defaced. In 2013, a firebomb was thrown at a door and hateful slogans were scrawled on the monestary walls. It was also damaged in a hate crime in 2016, when unknown perpetrators entered the prayer house and smashed statues.

The Israel Police said the matter is being investigated and that a forensics team was dispatched to the scene. “We’re using every means at our disposal to investigate and reach those involved,” the statement said.

Gadi Gvaryahu, executive director of the NGO Tag Meir, which supports victims of hate crimes in Israel, visited the monastery on Wednesday and expressed his empathy to the monks’ distress. 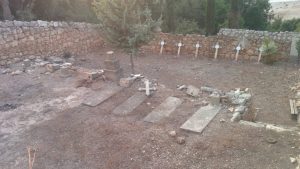 “The Tag Meir forum vehemently condemns the desecration of the Christian cemetery in Beit Jamal, which joins a string of hate crimes committed in recent days… the forum wishes for a conclusion to the investigation into the death of Aisha Rabi from the village of Biddya,” Gvaryahu said.

“The Palestinian population in the West Bank must be protected from offenders, just as Israeli citizens are,” he concluded.

Palestinians reported on Wednesday that twenty-eight cars were vandalized earlier this week in the West Bank village of Mazra’a al-Qibliya, near Ramallah. Some of the cars were also reportedly spray-painted with graffiti in Hebrew and Stars of David.