Germany laid down its first carrier in December 1936 and launched the Graf Zeppelin two years later. It would never enter service…

From the first days of his ascension to power, Adolf Hitler planned to rebuild the Kriegsmarine into a world-class navy. Most of the world’s other major fleets included aircraft carriers, and so German naval authorities soon determined that the Reich would also require carriers.

Germany laid down its first carrier in December 1936, and launched the Graf Zeppelin two years later. It would never enter service, however: disputes between the Kriegsmarine and the Luftwaffe would delay the development of an air group, skepticism about the value of carriers would slow the project and, finally, the demands of the war prioritized other projects.

Had Graf Zeppelin entered service, however, it might have posed a formidable problem for the Royal Navy. Acting either alone or in support of Kriegsmarine battleships, Graf Zeppelin could have threatened Britain’s commercial lifeline, and at the very least made the antisubmarine campaign considerably more complicated.

The Royal Navy began converting ships into aircraft carriers before the end of World War I. By the early 1920s, Japan and the United States had joined the pack. The Washington Naval Treaty accelerated the pace of carrier construction, leading to the conversion of several large battle cruiser hulls into fleet carriers. France joined the party shortly thereafter, and even the Soviets and the Italians made abortive moves towards carrier construction. 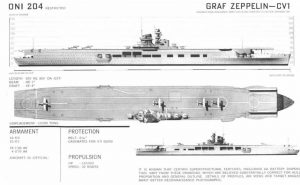 The Treaty of Versailles sharply limited both German aviation and German naval construction, making aircraft carriers out of the question. When Hitler renounced those restrictions, however, carriers were back on the menu. The Anglo-German Naval Agreement allotted roughly forty thousand tons to German carrier construction, and initially the Reich determined to construct two nineteen-thousand-ton ships (roughly the size of American, Japanese and British fleet carriers). Although access to foreign aircraft carriers was limited, the Germans did manage to acquire some engineering materials from Japan during the design process.