A South Carolina delivery truck driver is being lauded by even shark experts for posting a shark “detection” method on Facebook that is believed to be 100 percent accurate.

Josh Rinder of Aiken created the minute-long instructional video June 30, and it has been viewed nearly one million times and shared more than 14,000 times.

Among those sharing the video: The Atlantic White Shark Conservancy, which called it a “great trick to detect nearby sharks.”

In the video, Rinder stands at the ocean near Edisto, S.C., and demonstrates using a big spoon. 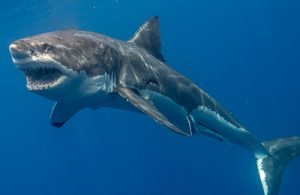 First, he says, you scoop up some of the sudsy water from the ocean. Then you put it in your mouth, swish it around and spit, sort of like people do at wine tastings.

It’s the flavor that’s the key, he says.

“If it tastes like salt, that means there’s sharks in the water.”

Response on Facebook to the “trick” has largely been a collective forehead slap, including one woman named Beth Peters Pustka who called it “natural science at its best.”

A few people may not have gotten the joke, however.

“You have to check every time(?)…How will you know when the sharks have left?!” asked one person who commented on Rinder’s Facebook page.