When Frenchman Emile Leray became stranded in a Moroccan desert with a badly damaged car, his ordeal was one which would have left most men helpless and desperate.

But after his Citroen car ground to a halt, the enterprising electrician would not be denied in his quest to find his way back to civilisation.

His amazing escape from the barren terrain saw Mr Leray singlehandedly rebuild his Citreon into a makeshift motorbike, in a dramatic escape which has seen him dubbed the most ‘extreme’ mechanic in the world. 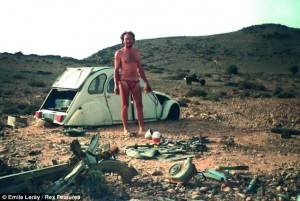 (Stranded: Mr Leray had found himself 20 miles from the nearest village, but slept under his car’s body while converting the rest of the vehicle into a motorbike)

His ingenious engineering saw him convert the car’s rear bumper into a rudimentary seat, shorten the chassis, and place the engine and gearbox in the middle to create a vehicle which somehow kept going long enough to transport him to safety.

The 43-year-old had been driving his Citroen 2CV across the desert from the Moroccan city of Tan-Tan. 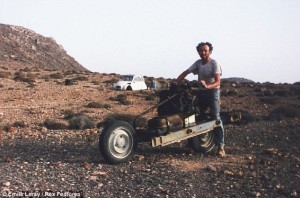 (Finished product: His amazing makeshift motorbike made from the car’s remaining parts allowed Mr Leray to travel to civilisation, where he was rescued by police)

However, along the way he was stopped at a military outpost and was informed that he couldn’t go any further.

Faced with prospect of returning to Tan Tan, Emile decided instead to go off road to navigate around the restricted area.

Unfortunately the rocky and bumpy terrain soon caused problems and he lost control of his car before crashing into a rock.

The impact caused the Citroen’s swing arm and wheel axle to snap – leaving the car undriveable. 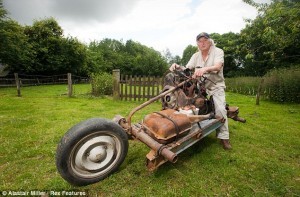 (Preserved: Mr Leray, now 62, has kept the motorbike as a memento of his incredible escape from the Moroccan desert)

With the nearest village at least 20 miles away, Emile didn’t feel he would be able to make it on foot.

Luckily, he had a small cache of supplies, water for several days and a few tools, including a hacksaw.

After considering his options, Emile decided that his best course of action was to use parts from his car to create a makeshift motorbike. 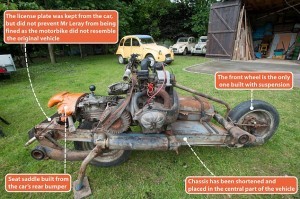 Mr Leray told the Sunday Times: ‘I wanted to do it off road because I had travelled round Africa about 10 times, so I knew the region well and therefore had no concerns.

‘I decided to do it in a 2CV because, although it is not a 4×4, it is tough. In Africa they call it the ‘Steel Camel’ because it goes everywhere — provided you drive it gently. One must not be rough.

‘I obviously was too rough because I broke it.

‘I could not have gone back on foot — it was too far. I put myself in what one calls survival mode. I ate less; I monitored my supplies of water and of food to make them last as long as possible.’

He started by removing the Citroen’s body, which he then used as a shelter to sleep under.

To build the bike he shortened the car’s chassis before reattaching the axles and two of the wheels, as well as installing the engine and gearbox in the middle.

He had thought that it would take him just a few days to construct the motorcycle, but in the end it took 12. 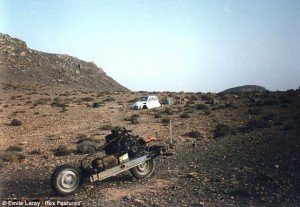 (Recovery: Mr Leray’s amazing extreme mechanic story happened in 1993, but has only just come to light)

Eventually, however, it was complete and, with just half a litre of water left, Emile started his ride back to civilisation.

The going was easy and he regularly fell off the seat, which was made from part of the car’s rear bumper.

After a day of riding Emile was picked up by the Moroccan police who drove him to the nearest village.

They also handed him a hefty fine because the registration documents for his car no longer corresponded to what he was driving.

Emile’s extraordinary tale has only just come to light after appearing on the internet and quickly going viral.

Although his story appeared in brief on French television in the 1990s, Mr Leray did not publicise his exploits, and they only recently emerged again after appearing on a motoring website.

Mr Leray, now 62 and living in northwest France, has been likened to action hero Tony Stark and his superhero Iron Man, who was known for his ingenious engineering ability.