Is Venezuela paying the price for adopting gun control?

The shocking nature of Venezuela’s economic collapse has been covered ad nauseam. However, one aspect of the Venezuelan crisis that does not receive much coverage is the country’s gun control regime.

Fox News recently published an excellent article highlighting Venezuelan citizens’ regret over the gun control policies the Venezuelan government has implemented since 2012. Naturally, this regret is warranted. The Venezuelan government is among the most tyrannical in the world, with a proven track record of violating basic civil liberties such as free speech, debasing its national currency, confiscating private property, and creating economic controls that destroy the country’s productivity. 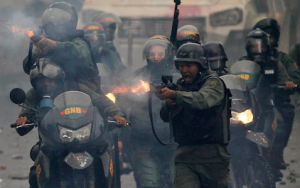 Elections have proven to be useless, as they’ve been mired with corruption and charges of government tampering. For many, taking up arms is the only option left for the country to shake off its tyrannical government. However, the Venezuelan government has done well to prevent an uprising by passing draconian gun control which will be detailed below.