It went up 7-fold

For some fans of Apple’s iPhone, the enthusiasm around new releases has recently been tempered by the device’s exorbitant price tags. The iPhone X, released two years ago, had a starting price of almost US$1000, causing a lot of startled shoppers. Apple followed up with the iPhone XR in the fall of 2018, which had a lower initial price range of US$749-899.

Looking ahead to the Apple Keynote in the coming week, analysts expect Apple to stick to their strategy of also offering lower price releases again. The company is expected to unveil two follow-ups to the iPhone X, the iPhone XI and the iPhone XI Max. The cheaper release will be the iPhone XR 2 (or XR 2019), a follow-up of the XR of 2018. Because Apple apparently wasn’t happy with XR sales despite the lower price tag, there have been some rumours that the follow-up will come at an even lower price.

The iPhone X was the most expensive iPhone on its release daIt te so far. Back when the original iPhone was unveiled by Steve Jobs in 2007, the 4GB version of the device cost $499 and the 8GB version cost $599 (both requiring a 2-year contract). 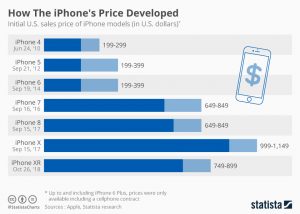