Shoes, buttons, a prayer book, bullets, Soviet coins were some of the items found

Hundreds of WWII artifacts were unearthed from a Nazi massacre site. Shoes, buttons, a prayer book, bullets, Soviet coins and a harmonica were among the 400 artifacts archaeologists recently unearthed at the sites of an infamous Nazi massacre. At the end of World War II in Europe, over the course of a few days in March 1945, the Nazis murdered 208 Polish and Russian forced laborers in Germany’s Westphalia-Lippe region. 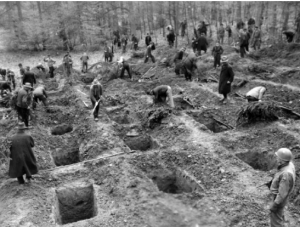 Archaeologists have been looking for traces of the massacre in three rural sites — near the towns of Warstein, Suttrop and Eversberg. They presented their findings to the public on March 8. 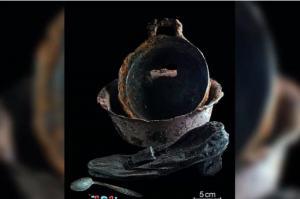 The researchers said that most of the 400 artifacts came from Langenbach Valley near Warstein, where 60 women, 10 men and a child were taken into the forest, under the pretense of being moved to a different labor camp, and then shot. Bullet cartridges found scattered in the surrounding forest suggest some of the laborers tried to escape the firing squad. Many of the artifacts were personal items that had been buried with the victims, such as a Polish prayer book and dictionary, colorful buttons and beads, and shoes. more at livescience.com author: Megan Gannon