The government’s 5+1 actions, including the closing down of hotspots in Mytilene, Chios and Samos (Moria, Vial and Vathi respectively), the conversion to closed centers of existing structures in Leros and Kos as well as measures to support local communities in order to tackle the illegal immigration problem were announced by State Minister Stelios Petsas and Deputy Minister of National Defence Alkibiades Stephanis.

As Mr. Stefanis said, the goal is to help the islands by transferring 5,000 immigrants to hotels and 15,000 to existing structures and new ones now being created by the beginning of 2020.

The 5+1 actions are as follows:

1. Specific action for unaccompanied children as a national coordinator is appointed in cooperation with the Ministry of Labor and Ministry of Citizen Protection and the announcements will be made soon by the Prime Minister.

2. Specific criteria are set for NGOs. Only those who qualify will be allowed to stay and operate in the country.

3. With regard to the granting of asylum by the adoption of the new law, the procedures will be accelerated and either asylum will be granted or they will be returned to their countries of origin.

– In Lesvos, Moria is gradually closing down and a new structure will be created which will function as a pre-deportation and identification centre with a capacity of 5,000+.

– In Chios, the existing structure closes down and a new closed one is being created with a capacity of 5000+.

– The existing structure in Kos will turn into a close one and will fit 2000+ people.

– The existing structure in Leros will turn into a closed one and will have a capacity of 1,000 people.

5. Support measures for the local communities with 30% reduced VAT in the five islands of the south-eastern Aegean until 31 December 2020.

6. Sealing off the borders with the establishment of a unified Border Surveillance Agency which will be enhanced with additional border guards in Evros and the islands.

Mr. Stephanis also announced that with the personal intervention of the PM Kyriakos Mitsotakis, the Shipowners’ Union is offering 10 patrol boats to the Hellenic Coast Guard with delivery taking place the following weeks.

Specifically for the new Border Surveillance Agency, the Deputy Minister of Defense explained that it would operate in a unified organization, under a single administration and by applying common procedures, and in the context of a joint operational plan.

Concerning aid in the necessary staff, Mr. Stefanis pointed out:

– The recruitment of 400 border guards for Evros and 800 for the islands,
– EUR 14 million has already been allocated (on November 8th, 2019) to address immediate needs,
– Procedures for unblocking the National Integrated Maritime Surveillance System have been stepped up. The project began in 2014 and the initial plan is to be completed in August 2022, which is unacceptable, as he stated.

Mr. Stefanis gave photos of how the new pre-deportation centres will look like.

The Deputy Minister of Defence presented photos of the current situation in the hotspots in the eastern Aegean islands and a plan of how the new closed centres in Samos, Mytilene, Kos, Chios and Leros are designed to be.

As shown in the plan, the new centres will have accommodation buildings, restaurants, canteens, schools, places of worship, a medical office and recreational areas. 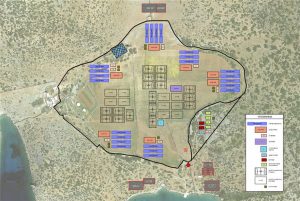 This is how the new pre-deportation centres under construction look like: