We have talked in-depth about how China is barreling forward with advanced unmanned combat air vehicle (UCAV) development—and this is just based on what the Chinese government wants us to see. Now a new photo has surfaced that appears to show a full-sized ‘Dark Sword’ UCAV. The concept has been talked about and shown in renderings and models for over a decade and a subscale remote controlled demonstrator was supposedly flown as well. But this is the first time evidence of a far more mature and substantive iteration of Dark Sword has been seen.

(Dark Sword has been around in concept form since the mid-2000s, and supposedly a sub-scale demonstrator has been tested, but nothing as elaborate or mature as what is seen in the most recent photo)

Past renderings depict a conical planform with lifting-body attributes. Non-maneuvering, but possibly retractable canard foreplanes are present on its nose section. A wide, splayed tail section with canted vertical stabilizers and swept wings round out the rest of the design and a single-engine is fed by a sharp, forward-swept, chin-mounted intake.

This new image appears to feature a real-life, practical interpretation of the Dark Sword concept using proven low-observable design elements that have been flown on other Chinese stealthy aircraft designs. Most notable is the presence of a Diverterless Supersonic Inlet (DSI). You can read all about this technology in this past feature of mine, but suffice it to say it was minted by Lockheed here in the United States in the 1990s and is a key feature on the F-35, yet China has run with the concept to an even greater degree.

Currently, China’s J-20 and J-31 stealth fighters leverage DSI technology, as does the latest variants of the JF-17 export fighter. It has even been incorporated on the second iteration of the J-10, the PLAAF’s ‘bread and butter’ multi-role 4th generation fighter.

(DSI was patented by Lockheed and tested on an F-16 in the min 1990s before ending up on the F-35. Today, China uses it on a slew of fighter aircraft like the J-10B seen on the left)

A DSI allows for supersonic flight without the use of complex maneuvering ramps that slow air to subsonic speeds before it hits the engine face. It also removes boundary layer air from the aircraft’s fuselage, providing the engine with stable and consistent airflow throughout the aircraft’s flight envelope without the necessity of non-stealthy splitter plates and other structures. Finally, it provides for radar cross-section reduction in multiple ways. First off, by not needing the aforementioned elaborate splitter planes and maneuvering ramps or bleed air doors which are not conducive to low-observability on the RF spectrum. The DSI’s ‘bulge’ and upturned leading edge also help to obscure the highly reflective engine face incoming radar waves.

The presence of a DSI on a more mature and full-scale version of Dark Sword is telling as it gives us a firmer idea of the aircraft’s performance. DSIs allow for supersonic flight up to about Mach 2. This fact helps dispel a lot of the erroneous and far-fetched rumors about Dark Sword, including that it is some sort of hypersonic super-weapon, which simply isn’t the case.

In addition, saw-tooth edges can be seen on the Dark Sword’s gear doors, which look very similar to the J-20’s setup. Sawtooth edges and edge alignment, in general, are design elements that have been used since the dawn of stealth to minimize radar reflectivity where there are seams and operating fissures on a stealthy aircraft’s skin.

This is an especially useful design element when it comes to optimizing a stealthy aircraft to evade X-Band and similar fire control radars, or at least to deny their ability to attain an engagement quality track. A high-speed tactical UCAV design like Dark Sword would prioritize low-observable design optimization in just such a way as it trades high-performance for broadband stealth against a wider range of radar operating bands. Its tail surfaces and other elements are already less than optimal when it comes to evading lower-frequency radars, but considering its speed, optimizing survivability against air-to-air and common ground-based fire control radars is most important.

The airframe also seems to wear a silver paint job similar to what the now operational J-20 wears. This includes lighter grey edges where composite low-observable structures are fitted or where embedded antennas are installed. Whether this is just representative or an actual feature of a working design remains unknown. 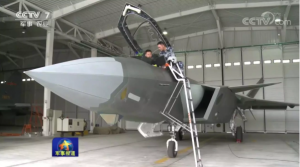 So, in essence, what we have here is stealthy unmanned airframe that can likely supercruise (fly faster than the speed of sound without the use of afterburner), or at least its design intends to do so dependent on available engine technology and hit top speeds up to around Mach 2.

Such an aircraft would be especially well suited for making supersonic dashes across the Taiwan Strait during a conflict as opposed to flying medium or long-endurance surveillance missions. It’s also possible that the design could also be intended to find its way to China’s upcoming catapult and barrier equipped aircraft carriers.

Whether based on land or at sea, Dark Sword appears to be uniquely well suited to operate under a ‘loyal wingman’ or ‘tethered’ concept of operations in addition to an independent one. Under such a setup, Dark Sword would be able to speed ahead of manned fighters on command to collect data and targeting information, or even engage targets itself. Such a capability would be useful to stealthy and non-stealthy manned fighters alike. But for the latter, it could be a huge force multiplier, providing high-end counter-air defense and strike capability without the cost of procuring droves of high-end stealthy manned fighters.

What we don’t know is if the aircraft shown in the photo is an elaborate mockup, an actual flying article, or something in between. We also don’t know when the photo was taken as it is more likely than not the project is much farther along now than what is indicated by the image. Remember, the Chinese show us only what they want to.

Above all else, this development serves as another reminder of how China is surging ahead when it comes to advanced unmanned combat aircraft capabilities, while the U.S. acts as if the concept doesn’t even exist even after it proved to be a game-changing breakthrough a decade and a half ago. 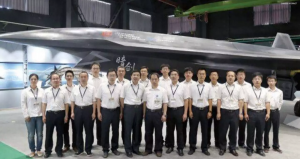 (And here is the photo of the Dark Sword)

Without a doubt, there is development being done in the classified realm on advanced unmanned systems, but at this stage, that is problematic in itself, especially when it comes to providing significant funding for such programs, as the very concept relies on volume of airframes above all else. It also makes tailoring an air combat fighting doctrine to accommodate such an awesome shift in capabilities nearly impossible, which is hugely wasteful and even negligent as it deeply impacts procurement decisions. It’s not worth relitigating this complex and multi-faceted but seldom talked and highly misunderstood issue in this article as we have explained it in great depth before. You can access that feature here.

In the end military culture, big business that serves it, and other special interests at play within the defense-industrial complex have kept advanced unmanned combat aircraft at bay seemingly to protect existing manned programs, at least in terms of having major defense programs of record. Yet they will all have to come to terms with the fact that manned platforms are not the future of aerial warfare and our enemies could care less about existential debates about the ethics of unmanned and autonomous weaponry.

At this point, it is quite possible that the Pentagon will be caught off-guard by its potential enemies’ ingenuity when it comes to this technology in the same way they were by far less advanced weaponized hobby-like drones. That was another capability many of us were screaming about for years, with those warnings apparently falling on deaf ears among the Pentagon’s decision makers until the threat had become all too palpable. Oh, and swarms of small drones is another area where China is rushing forward developmentally.