Ali Pasha was an Ottoman ruler with Albanian roots in the western Ottoman empire, where today’s Epirus, West Macedonia, and Thessaly regions lie.

Ali served as pasha of a large part of western Rumelia, the Ottoman empire’s European territories, which was referred to as the “Pashalik of Yanina” (today’s city of Ioannina in Greece).

Ali was a man with great administrative as well as diplomatic skills.

He was interested in modernizing his era’s concepts and ideas, and this, along with his religious neutrality and harshness in imposing law and order, caused both the admiration and criticism of his people. 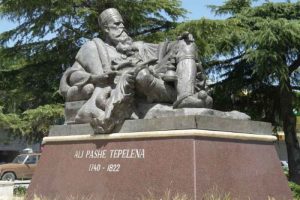 (Ali Pasha’s monument in Albania’s Tepelena, the town he was born)

Throughout the years of his rule, Ali was meticulously gathering large amounts of valuable objects, coins, jewelry, gems and other sorts of precious stones from the areas he placed under his absolute rule.

Soon, his collection became a matter of urban legend and following his death in 1822, people started wondering about the possible location of this unimaginable treasure.

Since the 19th century, people have tried countless times to find it.