Life is better than sci-fi movies…

Embedded in the lava still spewing some 130 feet into the air from Hawaii’s Kilauea volcano are green crystals.

Called olivine, these minerals can turn Hawaiian beaches green, and it appears some of the green gems are raining down upon homes near the eruption or popping up near lava flows.

“Yes, the lava that is erupting now is very crystal-rich and it is quite possible that residents might be finding olivine,” Cheryl Gansecki, a geologist at the University of Hawaii-Hilo that studies the composition of Kilauea’s lava, said over email.

“It can be carried in the pumice [rapidly cooled lava] pieces that have been rained all over the area,” she noted, or left behind when weaker lava rocks are crushed by cars or foot traffic.

U.S. Geological Survey (USGS) scientist Wendy Stovall, who was out studying Kilauea last week, also confirmed that recent lava samples do contain olivine, though she didn’t happen upon any separated green crystals herself.

Other folks in the area, however, appear to be collecting the tiny green gems as they see them:

Friends of mine live in Hawaii, right next to the area impacted by the most recent lava flows. In the midst of the destruction nearby & stress of the unknown, they woke up to this – tiny pieces of olivine all over the ground. It is literally raining gems. Nature is truly amazing. pic.twitter.com/inJWxOp66t

It’s certainly not unusual to find olivine crystals in most any Hawaiian lava rock, both new and ancient.

“It’s pretty common,” Stovall said in an interview. “There’s often olivine in rocks all over Hawaii.”

And this olivine can become completely separated from lava rocks in a variety of ways.

Sometimes the crystals can be simply weathered out from old lava rocks. Or, in the case of green-tinged Hawaiian beaches, lava can erupt through ocean water in steamy, explosive events, breaking the lava into smaller pieces and fast-tracking the separation process, said Stovall. 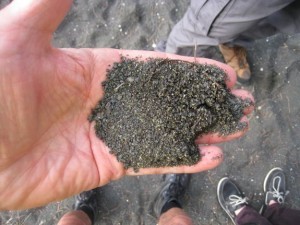 But in the case of this olivine presumably falling down on property near the eruption, the crystals “just kind of fall out” as lava is spewed into the air, said Stovall.

“The olivine crystals folks are finding on the ground scattered about are from violently ejected basalt [a type of lava] blobs wherein the embedded, earlier-formed olivine crystals are freed from their surrounding pahoehoe [syrupy lava] basalt liquid,” Stanley Mertzman, a volcanologist at Franklin and Marshall College, said over email.

Both violent ejections on land and from lava flowing into the ocean can “produce freed individual olivine crystals that people can pick up any time,” said Mertzman. 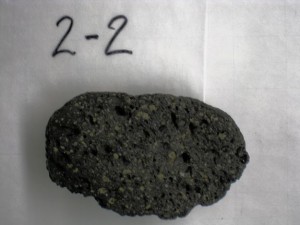 The crystals may be flying through the air from exploded bits of lava, but it’s unlikely they’re also coming from the volcano’s summit, where there’s been a large plume of steam and ash erupting from the crater — and at times rare, explosive eruptions.

“One thing I can say is that olivine is not raining out of the plume,” Michael Poland, a USGS volcanologist, said over email.

Poland added that olivine is common on the ground regardless, because roads in Hawaii are made up of ground up olivine-rich lava rock. 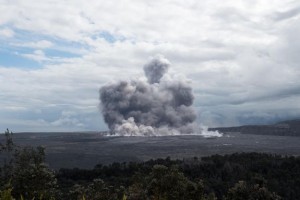 The little crystals, however, are not being created during the eruption. They’ve been formed deep underground long ago, brewing in the molten rock.

“It really is one of the first things to form,” said Stovall.

And olivine might not be the only crystal falling down inside the nearby neighborhood.

“It’s possible that other crystals are being found,” said Stovall, adding that a USGS rock specialist said olivine is difficult to tell apart from another common crystal, called clinopyroxene.

It’s also quite possible nearby islanders will continue to find semi-translucent crystals on the ground. The eruption, over a month old now, shows no signs of relenting, and could very well last months — or longer.