The criticism, reports of which were picked up by The Times of Israel, was in response to Norkin’s release of a photo which depicted an Israeli F-35 fighter jet flying just off the coast of Beirut, Lebanon.

One unidentified minister called the release of the photo “inappropriate and unhelpful,” adding that it is the type of thing that shouldn’t even be revealed to close allies.

The initial report from Hadashot news noted that Israeli Defense Minister Avidgor Liberman told the meeting neither he nor IDF Chief of Staff Gadi Eisenkot signed off on the release. 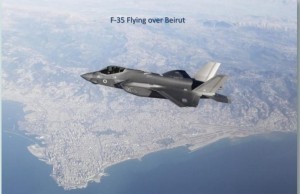 David Cenciotti at The Aviationist had much to say about the image, specifically noting radar reflectors shown in the photo.

“[…] it seems to show that the aircraft was also operating with radar reflectors [small light-colored notches at the base of the wings], hence not in ‘stealthy mode,’” he wrote.

Cenciotti said that according to Nir Dvori, who first published the image of the F-35 off Beirut, “they test [the F-35] in all kind of options. Fly with and without reflectors.”

“Indeed, the use of RCS enhancers would simply mean that stealthiness was not required for that specific mission during which they preferred to hide the aircraft’s stealth features preventing the enemy to collect data about the aircraft and test their radar hardware against the Lightning II,” Cenciotti concluded.

The photo, he added, “might well have been taken during a simple ‘recon’ mission rather than a combat one.”