A 1.500-year-old mosaic floor with a Greek inscription has been uncovered during works to install communications cables in Jerusalem’s Old City – a rare discovery of an ancient relic and an historic document in one. 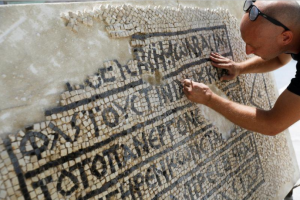 The inscription cites 6th-century Roman emperor Justinian as well as Constantine, who served as abbot of a church founded by Justinian in Jerusalem. Archaeologists believe it will help them to understand Justinian’s building projects in the city.

The full inscription reads: “The most pious Roman emperor Flavius Justinian and the most God-loving priest and abbot, Constantine, erected the building in which (this mosaic) sat during the 14th indiction.” 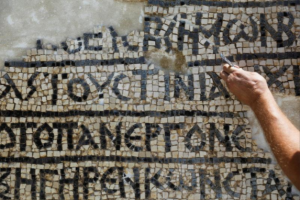 Indiction is an ancient method of counting years that was used for taxation purposes. Archaeologists said the inscription suggests the mosaic dated to the year 550/551 AD.

Justinian was one of the most important rulers of the Byzantine era. In 543 AD he established the Nea Church in Jerusalem – one of the biggest Christian churches in the eastern Roman Empire and the largest in Jerusalem at the time. 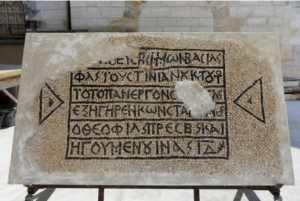 “The fact that the inscription survived is an archaeological miracle,” David Gellman, director of the excavation on behalf of the Israel Antiquities Authority, said in a statement.

“Every archaeologist dreams of finding an inscription in their excavations, especially one so well preserved and almost entirely intact.” 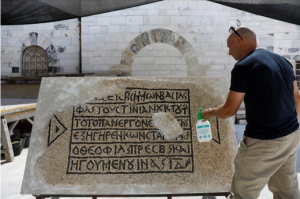 Researchers believe that the building of which the mosaic was once part, located beside the Old City’s Damascus Gate, was used as a hostel for pilgrims.

The mosaic, which was unveiled to the media on Wednesday, was discovered earlier this summer. Conservation experts have removed the mosaic and are treating it in a specialist workshop.