On Sunday, March 4, Italian voters will elect the 945 members of the parliament for the 18th legislature since 1948.Elections for MPs and Senators take place every five years – with 630 members of the Camera dei Deputati (lower chamber) and 315 of the Camera del Senato (the Senate/upper house) up for grabs this weekend.

The economy and immigration are set to be the top issues of contention this year, following the 2015 migrant crisis that saw Italy become a spot for new arrivals form the Mediterranean.

There is also uncertainty surrounding a new, untested electoral system and the possibility that a hung parliament could lead to lengthy coalition talks or even more elections.

When do polls close? What time will we have a result?

Polls for the Italian election 2018 will be open from 7am until 11pm across the country (6am until 10pm GMT).

The first exit polls should be published immediately after and the votes are expected to be fully counted around 2pm on Monday local time (3pm GMT).

However, the first actual results could be released in the early hours of Monday, according to media reports.

And with an outright winner of the election a long-shot, the likely result is a coalition of left-leaning or right-leaning parties. 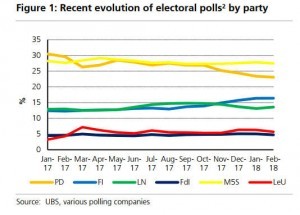 The latest polls point to a hung parliament. If this happens, Italian President Sergio Mattarella, will call on parties to form a broader coalition of pre-election adversaries.

Lega, which recently changed its name from Lega Nord (Northern League) in order to broaden its appeal, is likely to be in with a chance of forming part of the next government.