Jason Manford has branded the concept of cultural appropriation as a “load of b******s” in an online rant and suggested the term be changed to “cultural appreciation”.

The comedian shared his thoughts along with an article from The Mirror which claimed Love Island star Molly-Mae Hague had accused of “cultural appropriation” by her Instagram followers for dressing as Cleopatra for Halloween.

Manford, 38, hit out at the use of the term – which is defined by Oxford Dictionaries as the ‘unacknowledged or inappropriate adoption of the customs, practices, ideas, etc. of one people or society by members of another and typically more dominant people or society’ – on Twitter.

He wrote: “What a load of b****cks. I always feel like Quite a lefty liberal until I read about ‘cultural appropriation’. What a w*nky, wokey term. Why don’t we can it ‘cultural appreciation’ and be friends again. (Waits to be accused of #WhiteManSplaining).”(sic) 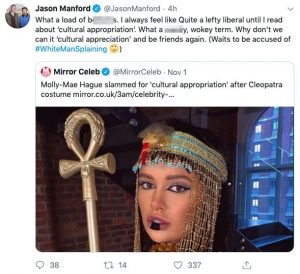 However, a follower opined that it was “disrespectful” to wear another culture as a costume as they tweeted: “Culture is important and shouldn’t be used as a costume. The same way I wouldn’t dress up as a Native American. It’s disrespectful. I think there’s other ways to appreciate culture”.