The plane sold for $430,000 on Saturday at a California event featuring celebrity memorabilia

A private jet once owned by Elvis Presley has been auctioned after sitting on a runway in New Mexico for 35 years.

The buyer was not disclosed in the sold note posted on the firm’s website, and auctioneer Brigitte Kruse said she could not immediately release information about the buyer or the buyer’s plans for the plane. 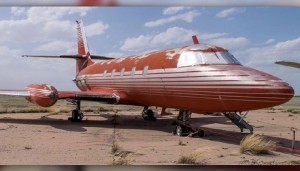 The auction house says Elvis designed the interior that has gold-tone woodwork, red velvet seats and red shag carpet. But the red 1962 Lockheed Jetstar has no engine and needs a restoration of its cockpit.

The jet was owned by Elvis and his father, Vernon Presley, Liveauctioneers.com says.

It has been privately owned for 35 years and sitting on a tarmac in Roswell, New Mexico.

This first of the two JetStar aircrafts Elvis owned, become the center of a long, drawn-out FBI investigation into what appeared to be a sophisticated swindle perpetrated on Elvis and Vernon involving the leasing and refurbishing of the aircraft. The case was not concluded until after Elvis’ death.

Photos of the plane show the exterior in need of restoration and seats of the cockpit torn. 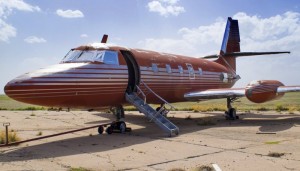 Roy McKay told KOB-TV in Albuquerque he designed the interior himself. McKay said that when he purchased the jet, it had a two-toned gray interior and “kind of looked like a casket.”

Federal Aviation Administration records show no interior changes were ever made to the jet, Carter said. 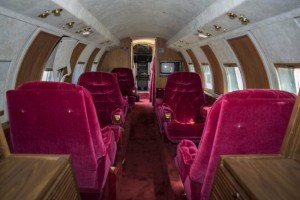 Presley was born in Tupelo on Jan. 8, 1935, and moved to Memphis with his parents at age 13. He became a leading figure in the fledgling rockabilly scene by covering songs originally performed by African-American artists like Big Mama Thornton (“Hound Dog”) and Arthur Crudup (“That’s All Right”).

His provocative dancing and hit records turned him into one of the 20th century’s most recognizable icons. Historians say his music also helped usher in the fall of racial segregation.