The latest issue of Al Qaeda’s “Inspire” magazine has an opening spread titled “Destination airport, and Guess What’s on the Menu?” giving slick advice to novice terrorists as to how to bomb passenger planes. The digital magazine released the story on Christmas Eve, on the fifth anniversary of Umar Farouk Abdulmutallab’s Christmas Day 2009 bombing attempt on Northwest Airlines Flight 253.

The entire issue gives advice to lone wolf jihadists, urging them to attack commercial passenger planes and giving them instructions as to how to do this with lengthy sections on how to build a new bomb that can be hidden. Detailed ways to “breach airport security” are given as well as directions into how to make a hidden bomb and other field tactics related to selecting targets and executing attacks. 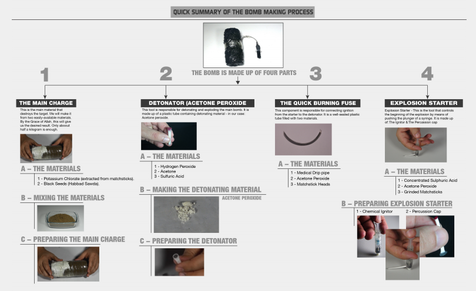 A letter by the magazine’s editor-in-chief Yahya Ibrahim writes:

“Hereby, Inspire magazine is committed to arm Muslim individuals – as well as Muslim groups as is in this issue – in their Jihad on America.

Previously we have presented muslims with different weapons, including bombs and tactics… Now we are obliged to give our ummah something special. Something unique that can easily be prepared at home – that is the reason we have taken a long period to produce this issue. Here, we give the Muslim ummah a bomb recipe that America fears it might reach in the hands of other Mujahideen in other fronts.

However, what America didn’t expect is that this recipe is going to be in the reach of all Muslims around the world. It will circulate in the social media and Muslims will translate it into different languages. Some will be pleased and pass on the message; while others will be inspired and most importantly make the bomb.”