Jussie Smollett’s mugshot has been released by the Chicago Police Department after the “Empire” actor has been charged with felony disorderly conduct. This comes less than a month after Smollett, 36, first told police that he had been attacked in a racist and homophobic assault in Chicago. Smollett had said that his assailants referenced Donald Trump’s “Make America Great Again” slogan as he was attacked in the Streeterville neighborhood of the city. 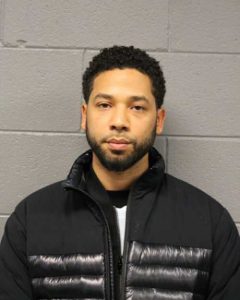 On February 21, Smollett handed himself into Chicago cops to answer to one count of felony disorderly conduct as his accused of making a false police report. Smollett did Chicago Police Superintendent Eddie Johnson announced the arrest in a press conference. Johnson began the press conference by stating his wish that the victims of gun violence in Chicago got as much attention from the media as Smollett’s case did. Johnson referred to Smollett’s case as a “publicity stunt.” Johnson said that Smollett orchestrated the attack because he was dissatisfied with his salary.

Police Superintendent Eddie Johnson said in a news conference that he “took advantage of the pain and anger of racism to promote his career”.

Mr Smollett is charged with filing a false police report after he said he was the victim of a homophobic attack.

Police say he also had sent a racist letter to himself at a Fox studio.