Man arrested for smuggling snakes into US

A California man has been arrested on a federal smuggling charge stemming from the seizure of a package that contained three live king cobras hidden inside potato chips canisters, according to the U.S. Department of Justice.
Special agents with the United States Fish and Wildlife Service arrested 34-year-old Monterey Park resident Rodrigo Franco on Tuesday, the DOJ said in a statement. He was charged with one count of illegally importing merchandise to the U.S. and was expected to make his first appearance in court Tuesday afternoon.
On March 2, U.S. Customs and Border Control agents inspected a package sent from Hong Kong and discovered the cobras, a “protected and highly venomous reptile,” according to an affidavit filed in the Central District of California. Each snake was approximately 2 feet long, court documents state.
In photos provided by the U.S. Fish and Wildlife Service, the cobras appeared to be coiled inside of the potato chip canisters, which appeared to be sealed with a plastic lid.
The parcel, which was sent through the U.S. Postal Service, also contained three albino Chinese soft-shelled turtles, the DOJ said.
Franco allegedly mailed six additional turtles — including desert box turtles, three-toed box turtles and ornate box turtles — from the United States to Hong Kong, but the package was intercepted by the U.S. Fish and Wildlife Service. 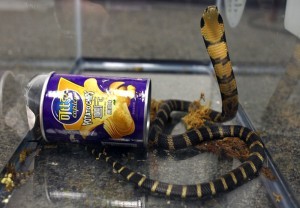