The slap heard round the world

CNN reports that Le Pen opened the debate by immediately skewering Macron – a centrist – as a “cold banker” that would raise unemployment levels and allow elites to “plunder” the economy.

The outlet states that Macron shot back declaring Le Pen as someone that lacks “finesse” and has promoted the “spirit of defeatism” by banking on the anger of citizens.

At one particular point in the debate, Le Pen went right for the jugular and said, “don’t play with me. Don’t play teacher and pupil. It’s not my thing.”

On the surface, that may have sounded like a mere jab Le Pen was making in reference to Macron’s age.

But dig a little deeper and you’ll see Le Pen’s jab has the potential to be something far more naughty.

This is a photo of Emmanuel Macron and his wife, Bridgitte Trogneux. 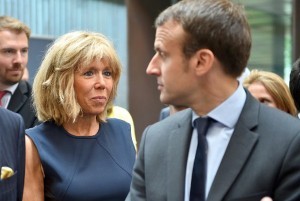 According to The Washington Post, the pair met when Macron was just 15. She ran the drama club at his high school. The pair apparently fell in love and Macron’s parents, wary of the whole situation, sent him away to Paris to study.