He became only the ninth champion to make “repeat” in the rings in the sport’s 114-year history!

Lefteris Petrounia triumphed and won the gold medal in the World Championship for the second consecutive time at the Montreal Olympic Stadium, where some of the most important pages in the history of the gymnastics are written.

The 27-year-old Greek Olympian gathered 15.433 points and defended the title he had won two years ago in Glasgow. The Greek champion confirmed once more why he is considered to be unbeatable, performing his program with a 6,30 factor of difficulty.

Thanks to his second consecutive world title, Lefteris Petrounia has become a legend of the competition, having become only the ninth champion to make “repeat” in the rings in the sport’s 114-year history.

At the same time, he became the second Greek double champion of the gymnastics, equalizing Vlassis Maras (gold in 2001 and 2002) and reached seven successive victories in official matches over the last year and a half. 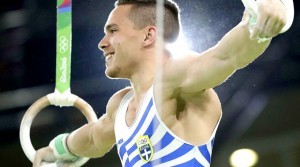