An ancient marble altar with a nude warrior battling a serpent monster has been discovered by villagers near the Akçay River in Turkey. The artifact likely to be from the second century A.D. showes a carved scene that is difficult to interpret. Archeologists are speculating as to whether the warrior is Bargasos, son of Hercules, fighting a monster in battle to bring forth river god Harpasos to whom the alter is dedicated.

When the altar was created, the river now known as Akçay by its Turkish name was known as the Harpasos River. Flavius Ouliades set up the Greek inscription at the top of the altar that explains that it was created following a dream. The dedication shows that the person who created the altar had a strong belief in the river god. He had promised to set up the altar if the river god answered his prayers that may have been for a good harvest or protection.

The nude male warrior on the altar wears a helmet with a crest and holds a dagger in his right hand and shield in his left. The lower corner depicts a curving snake with many heads that depicts the mythical Hydra. Despite the scene, researchers say that the warrior is not Hercules, but his son Bargasos, who in ancient mythology was the son of Hercules and a woman known as Barge. Bargasa, in modern-day Turkey was named in honor of Bargasa. 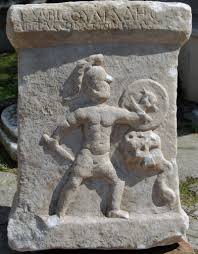 In ancient mythology the battle depicted on the altar may have led to the creation of the river god Harpasos. Archeologists believe it may be a representation of a local myth describing Bargasos’ battle against a ravaging river with many arms. Once defeated, the river turned into the river-god Harpasos.

The altar is 2 feet high and 1.5 feet wide and is now being displayed at the Aydin Museum in Turkey.