He calls himself “The most fabulous supervillain on the internet”

“Have you heard of Milo Yiannopoulos?” I overheard someone saying a couple of days ago. “Have you watched his shows on YouTube? They’re kind of addictive!” they continued as Berkeley burnt. It’s a sad fact that the current student infatuation with professional provocateurs is good for no-one: left-wing students appear too willing to engage in violence, whilst campus conservatives are more in love with unprincipled agitators than the real value of free speech.
I’m not a massive fan of Yiannopoulos, whose cheeky chappie act is at odds with his penchant for the most morally dubious bandwagons he can find (see: Gamergate, the alt-right, Pizzagate.) For all his charm and verve, the movements which he claims to champion have a fair few members with the sort of views on women, homosexuality, and non-Europeans which went out of style with the zoot suit. As a result, he comes across as mercenary at best, and as a peddler of hatred at worst (this is a man who singles out trans students for mocking, and allegedly intended to out undocumented students at Berkeley). 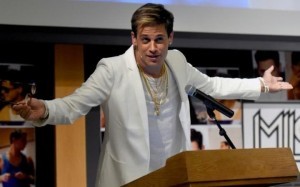 But there’s little defence for the violence which Berkeley faced, like the University of Washington before it. In an excellent piece by a student journalist, the arbitrariness of the fighting is shocking: it’s impossible to justify students being attacked because some professional revolutionary with anger issues decided they looked like a Nazi. That refrain against ‘respectability politics’ certainly doesn’t justify attacking unfortunate bystanders on a whim. Frankly, the idea that initiating violence is the solution to politics is the preserve of bonkers ideologues or thugs out looking for a fight, and that’s just as true on the left as on the right.
Resorting to violence is particularly stupid given that Yiannopoulos’s celebrity relies on reactions which are as outlandish as his personality. He’s a man who has largely made his reputation through being a troll. Yiannopoulos deliberately and conspicuously tries to tick people off: ignore him or walk out on him (a la protesters against Katie Hopkins at Brunel University) and you deprive him of some of his power and controversy. Beating up people coming to hear him speak simply makes him stronger.