The sandy beach at Dooagh Bay, County Mayo, washed away in the 1980s

A sandy beach that was washed away more than 30 years ago by storms has reappeared on an Irish island.

Sean Molloy, manager of Achill Island Tourism told The Independent that he was 13 years old when the sand disappeared. 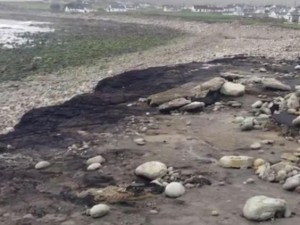 (The beach as it looked for 30 years, before the sand returned)

“It was completely washed away, not a grain of sand was left,” he said.

The area where the sand had been remained covered in pebbles and stones for over 30 years, while the businesses that had thrived around it in the local village – four small hotels, five pubs, a shop a few restaurants – almost all closed.

But two years ago people surfing and jet skiing in the bay reported seeing sand offshore, while at low tide a sand bank began to appear in the bay, though the beach area remained covered in pebbles.

The landscape changed dramatically at Easter when the wide sandy beach reappeared. The island was subjected to constant strong north winds from the Atlantic which appeared to blow the sand back onto shire, depositing it back onto its former home almost overnight. 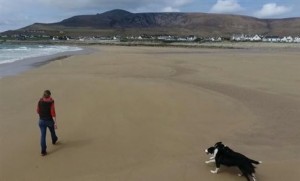 (The beach as it is today)

“The winds blew the surface water back and pushed the bottom water up onto the beach and took all the sand with it,” Mr Molloy explained.

People have been flocking down to the beach in the past week to see it with their own eyes, Mr Molloy said, while others have sent him messages at hearing the news.

“I’ve had lovely messages from people saying they can’t believe the beach is back [which has] brought back so many lovely memories.”

Alan Gielty, who runs a restaurant in the area, told the Guardian that it is great to be able to look out onto a beautiful beach instead of just rocks.

“Since people have seen the news of the beach we have had plenty more visitors from the middle of the country,” he added.

Two strong storms caused damage to the road leading to the pier in 2014, Mr Molloy added, but after local campaigning it was rebuilt. Mr Molloy is hoping that now the beach has returned the council will fund the restoration of the access roads to it, enabling better access down to the sand.