Malala Yousafzai was targeted by trolls after she was spotted ‘wearing skinny jeans and heeled boots’ during her first week of studies at Oxford University. The women’s rights activist was criticised after an unverified photo was published in Pakistan media appearing to show Malala wearing skinny jeans, ankle boots and a bomber jacket. The 20-year-old was almost murdered on her way to school when Taliban fighters shot her in the head because she had campaigned for girls to get an education.
Last week, she tweeted about taking her first lectures in Philosophy, Politics and Economics, or PPE, exactly five years after being targeted on her school bus. She went on to win the Nobel Peace Prize for her global campaigning, but she became the target of abuse over the weekend after an apparent image of her was shared on the Facebook page of Pakistani forum Siasat.pk on Saturday (October 14). Despite wearing her duppatta on her head, hateful messages were posted alongside the photo, criticising Malala for not wearing a shalwar kameeze, the traditional dress of Pakistan and typically worn in Muslim countries. 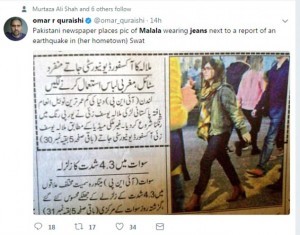 Some messages even compared the peace campaigner to Lebanese American porn star Mia Khalifa, who caused controversy for starring in an adult film while wearing Muslim clothing. Yaseen Khan wrote: ‘She is the player of American game . I feel very embarrassed to say that she is Pakistani.
And UxMan MaAn wrote: ‘Next Mia Khalifa.’ One hateful message posted on Twitter and re-published in the Pakistani media said: ‘That was the reason the bullet directly targeted her head long time ago.’ While Shaiq Sirajuddin Shah wrote: ‘It’s not particularly important for men but women shouldn’t wear those tight jeans because they get exposed.’ Many others have since taken to social media to hit out at the criticism.