There is a great gap in favour of male statues

In the U.S. and the UK, there is a staggering lack of public statues of women. As database enquiries by the New Statesman in the UK and the Washington Post in the U.S. show, only around 13 and 7 percent of statues in these countries depict historical women as opposed to historical men. While U.S. numbers are a couple of years old, the country likely still has some catching up to do given the enormous gap between male and female statues.

The U.K. analysis showed that if fictional characters were included, the count of individual women statues rose to 30 percent. 110 women statues in the UK were depictions of allegorical or mythical figures, like justice or the arts. Out of the 71 real-life women depicted in the UK, 46 were royals, compared to 19 out of 517 historical men. 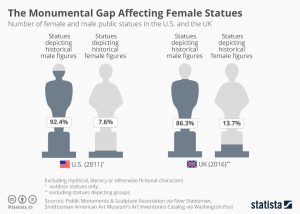