The club has the highest budget of all

A day after Manchester City sealed its second consecutive Premier League title after a long and exhilarating title race, England’s newly crowned champion is facing scrutiny from UEFA investigators. According to a New York Times article published on Monday, English soccer authorities and the European football governing body have been investigating the club owned by the Abu Dhabi United Group for months, looking into possible financial irregularities.

The allegations involve City trying to circumvent UEFA’s financial fair play regulations by masking cash infusions from the United Arab Emirates through inflated sponsorship agreements with UAE airline Etihad and could result in City being banned from the Champions League if the club is found guilty.

Since the Abu Dhabi United Investment Group acquired Manchester City in 2008, the club’s new leadership under chairman Khaldoon Al Mubarak has transformed the club from mid-table mediocracy to a global footballing powerhouse, winning four Premier League titles in the past eight years. City’s success has always been eyed with suspicion though as it wouldn’t have been possible without the financial muscle of its Emirati owners. As the following chart shows, no club in world football has spent nearly as much money on transfers over the past 11 years as City has under its new ownership. According to Transfermarkt.de, a German website specializing on football transfers, Manchester City’s transfer balance since 2008 is -$1.36 billion, outstripping even that of Qatari-owned Paris Saint-Germain by more than $400 million. 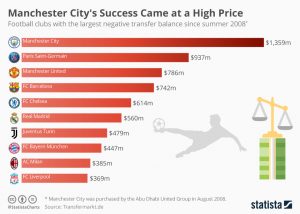