Two women were stabbed to death Sunday in a suspected terrorist attack at the Marseille train station in southern France.
The assailant was shot dead by French security forcesSoldiers in France have shot a man dead at Gare de Marseille-Saint-Charles station in Marseille after multiple people were stabbed.
Some victims are said to be seriously injured after the rampaging knifeman attacked.
The French prosecutor has confirmed the attack at the Saint Charles station as he makes his way to the area.
Police have described it as an “ongoing” incident and asked people to avoid the area which has now been evacuated. 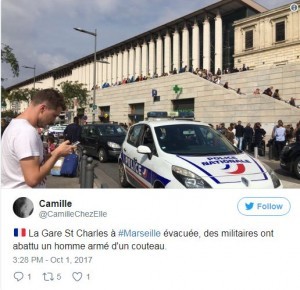