The stunning Korolev crater in the northern lowlands of Mars is filled with ice all year round owing to a trapped layer of cold Martian air that keeps the water frozen.

The 50-mile-wide crater contains 530 cubic miles of water ice, as much as Great Bear Lake in northern Canada, and in the centre of the crater the ice is more than a mile thick.

Images beamed back from the red planet show that the lip around the impact crater rises high above the surrounding plain. When thin Martian air then passes over the crater, it becomes trapped and cools to form an insulating layer that prevents the ice from melting. 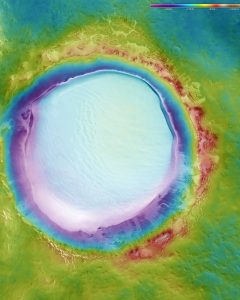 The latest picture is a composite of five strip-like images taken from the European Space Agency’s Mars Express probe, which swung into orbit around the planet on Christmas Day 2003. On the same day, the orbiter released the Beagle 2 lander, a British probe built on a shoestring budget, which touched down but failed to fully open on the surface.

Mars Express photographed the Korolev crater with its high-resolution stereo camera, an instrument that can pick out features 10 metres wide, or as small as 2 metres when used in super-resolution mode. 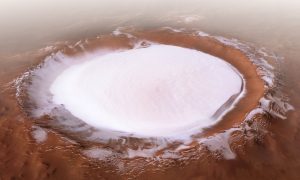 Evidence from orbiting spacecraft, rovers and landers reveals ancient water courses and lake beds on Mars. Vast quantities of frozen water have been found at the planet’s poles. In July, astronomers used Mars Express radar measurements to find what appeared to be a 12-mile stretch of briny water beneath the planet’s surface.

The Korolev crater is named after Sergei Korolev, the Russian rocket engineer and spacecraft designer known as the father of Soviet space technology. Korolev worked on the Sputnik programme that sent the first artificial satellites into space in the 1950s, and later on the Vostok programme that carried Yuri Gagarin into the history books as the first man to orbit Earth.