The Southern European countries released a statement during a meeting Friday condemning Turkish actions in the Eastern Mediterranean. The statement called on the European Union to “consider appropriate action” against Turkey if it doesn’t stop an “illegal” hydrocarbon drilling bid in waters where the Republic of Cyprus has exclusive economic rights, the leaders of France, Italy, Greece, Portugal, Spain and Malta said in a joint declaration issued at the end of the sixth Med7 summit in the Maltese capital La Valletta on Friday.
In their Declaration the MED7 express their “deep regret that Turkey has not responded to the European Union’s repeated calls condemning Turkey’s illegal continued actions in the Eastern Mediterranean and the Aegean Sea and express serious concern over actual or potential drilling activities within Cyprus’ EEZ.”
“We ask the European Union to remain seized on the matter and, in case Turkey does not cease its illegal activities, to consider appropriate measures in full solidarity with Cyprus,” they note.
In a statement during a joint press conference by the seven southern EU member states leaders, Malta’s Prime Minister and host Joseph Muscat said that “we have made it very clear that we give our total support to our Cypriot friends on recurrent issues and that this support is unwavering.” 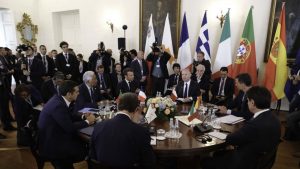 “Turkey must stop its illegal activities in the exclusive economic zone of Cyprus,” said French President Emmanuel Macron. “The European Union will not show any weakness on this subject.”
Greek Prime Minister Alexis Tsipras said: “It’s important to signal that the EU should take specific measures if Turkey does not stop its infringing behavior. Whoever doesn’t respect international law must suffer the consequences.”

Italian Prime Minister Giuseppe Conte also conveyed “our support and full help to the Cyprus government.” “Cyprus is completely entitled to economic measures to protect its resources in its EEZ,” he said speaking through an interpreter. 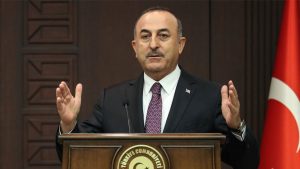 The Turkish Ministry of Foreign Affairs on Saturday condemned a joint statement released by the MED7 nations targeting Turkey at a summit of southern European Union states, saying Ankara rejects biased remarks disconnected from reality and against international law.
“These expressions reflect the Greek Cypriot/Greek duo’s national positions that are not compatible with the U.N.’s principles regarding a solution to the Cyprus question and international law. They do not hold any value, provision or influence for us,” the ministry statement said, describing the Med7 statement as a new and saddening example of how Greek Cyprus and Greece abuse their EU membership and how some EU countries serve as an instrument to this.