The face of an 18-year-old girl who lived 9,000 years ago in Thessaly was revealed today at the auditorium of the Acropolis Museum. The girl named “Avgi” is the reconstruction of the face from the girl’s skull, which, along with its skeleton, was found in 1993 at the cave of Theopetra.
The revelation of the face of the girl took place at the end of the event “Avgi at the dawn of civilisation,” during which a series of speakers covered a wide variety of scientific topics, from archeology, art history and architecture, while other experts provided insight into prehistoric gastronomy, clothing and even in aesthetics.

Avgi is the second creation of the Orthodontist Manolis Papagrigorakis, Assistant Professor of the University of Athens, after the reconstruction in 2010 of the face of Myrtis, the 11-year-old girl who lived and died of typhoid fever in Athens in the 5th century BC. “My joy is great that, together with my friends and colleagues, we are presenting the second reconstruction of an ancient person”, said Mr. Papagrigarakis at the opening of the conference. The first speaker of the conference was Nina Kyparissi-Apostolika, Professor in Prehistoric Archeology, director of the excavations of Theopetra Cave and Honorary Director of the Ephorate of Palaeoanthropology and Speleology of the Ministry of Culture. Her speech titled “The First Confirmed” Presence of “Mesolithic Man in Thessaly, 9000 Years After”, offered valuable information about the Cave and the burial of “Avgi”, but also for the period she lived, the Mesolithic (about 9000 -6700 BC), which, as the archaeologist said, has barely been touched upon in the Greek landscape. 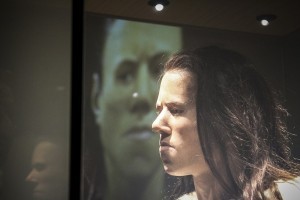 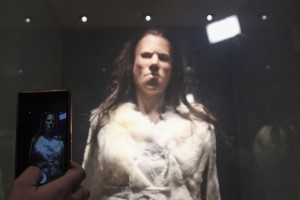