It is a random process based on the Greek alphabet

Each of these weather fronts is “baptised” with a name that is mainly associated with ancient Greek history or mythology. 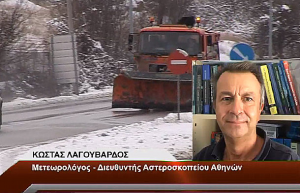 But what is the exact process and who makes the final choice as to what name will appear on all the TV screens and weather forecasts?
The selection is made by scientists from the National Observatory of Athens and its director, Costas Lagoudaros, who in a recent interview with the newspaper “Ethnos” had explained the reason they went about doing it what they did.

The name chosen is random, and is not related to each case separately. As he explained, the teams just pick names based on the Greek alphabetical order.
Tuesday’s snowfall was named after “Tilemachos”, the son of Odysseus in the Iliad, while the new wave of rainfall and strong winds is called”Hypatios”, a name starting from the next letter in the alphabet.

This means whenever the next weather phenomenon hits its name will start from the Greek letter “Φ” (F) which follows “Y”.