Meghan Markle’s close friend, fashion designer Misha Nonoo, is getting married this weekend – but it looks like the Duchess of Sussex might be forced to miss the special occasion.

Misha will wed oil tycoon Michael Hess in a several-days-long celebration in Rome. The ceremony itself takes place this Saturday, 21 September, but the weekend will also reportedly include a party at Cinecitta, the iconic film studios where renowned Italian directors including as Rossellini, Fellini, and Visconti created their work.

According to Hello!, Misha and Michael’s wedding has a glittering guest list, with high profile names such as Katy Perry and Orlando Bloom, Karlie Kloss and husband Joshua Kushner, Ivanka Trump and husband Jared Kushner, and even Queen Rania of Jordan having been invited. 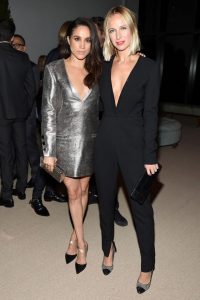 Also among the invitees are, of course, Meghan Markle and Prince Harry. But sadly for Meghan, it doesn’t look as though the Sussexes’ schedule will allow them to attend. The Duke and Duchess begin a two-week royal tour in Africa on Monday, September 23, which would require them to travel from Italy to Cape Town after the wedding on Sunday (approximately a 13 hour flight) if they were to try to squeeze Misha and Michael’s nuptials into their schedule.