Australian police have arrested a driver after a car drove into a crowd in Melbourne.

The car “collided with a number of pedestrians” on Flinders Street, a busy junction in the centre of the city, said Victoria Police.

The state ambulance service said 13 people have been taken to hospital. At least two others are being treated at the scene.

Police have asked people to avoid the area.

They have not said there is any indication the incident is terror-related.

Images from the scene show a number of people lying on the ground close to a large white vehicle.

Victoria Ambulance said, in a statement, that a child of pre-school age has been taken to hospital with serious head injuries. 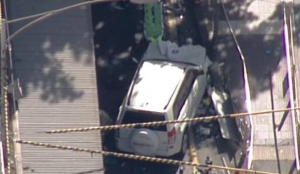 One witness told local radio station 3AW the car had “just mowed everybody down, people were flying everywhere”.

“He has gone straight through the red light at pace and it was bang, bang, bang. It was just one after the other,” he said of the moment the vehicle started hitting people.

In January, six people died when a man drove a car into pedestrians on Bourke Street.